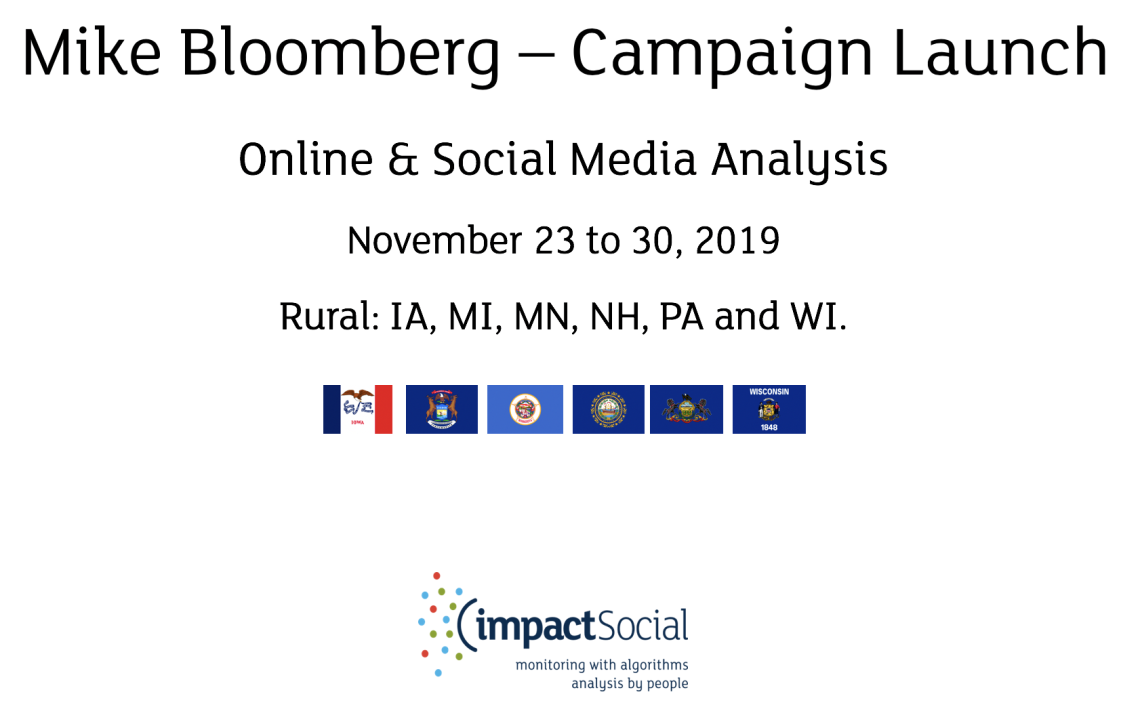 The launch of Mike Bloomberg's primary candidacy has been met with a largely negative online reaction in the key rural battleground states (44%). Granted around 2/3 of these conversations are being conducted between Republicans who are horrified by his mere presence. However, the remainder are dyed-in-the-wool Democrats who see Bloomberg as far removed from their lives.

Given how few conversations (5%) speak in favour of his candidacy it is hard to see how TV/SM adverts - regardless of their number and cadence - can change this reality.

Based on this analysis Donald Trump will doubtless be cheering on Bloomberg all the way to the DNC.

Republican's make hay following the Bloomberg launch. They aggressively attack Bloomberg for his views on guns, climate, stop and frisk and a tax on sugary drinks. They also accuse him of manipulating the media and attempting to buy the presidency.

It would be a mistake dismiss the criticism as simply right-wing partisan bleating. Around a third of this chatter stems from the left as many Democrats see Bloomberg as right wing, out of touch and egotistical. This view is fuelled during the period by Bloomberg's suggestion that a tax on sugary drinks benefits the poor, which has caused real anger.

Some Democrats suggest that if Bloomberg really wants to help, he should buy Fox News, or just spend his money calling out Trump.

Though small in number some feel passionately that Bloomberg is exactly what the Democrats need. They witness his success in business, his philanthropy and his thoughts on the issues of the day i.e. guns, immigration and health and readily declare their vote.

Importantly they also feel that Bloomberg is better positioned than any of the other Democratic candidates to take on Trump and relish the prospect.

Finally, many of those in favor of action on climate lend their support. In their view Bloomberg is a man of action who will make things happen.